You are here: Home / Projects

Research at INRG covers all levels of networking design, including data center design, network security, distributed sensor networks for a variety of applications (including healthcare and wildfire monitoring), machine learning algorithms for a variety of applications (including data center traffic load balancing and improving network performance), and more. 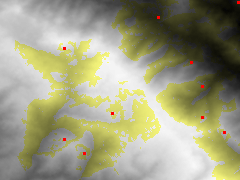 One can use an outdoor, Internet of Things sensor network to detect events visually, but there must be clear line-of-sight (CLOS) between a sensor and the location of an event. This research project explores various deployment algorithms for finding locations for a network of IoT nodes to maximize the chance of detecting events.

Destructive wildfires have recently caused catastrophic and unprecedented damages in California and different parts of the world. Despite significant fire prevention efforts, wildfires are anticipated to grow in frequency and intensity due to the changing climate and shifting urbanization patterns. This research project aims to develop and deploy a large-scale IoT network consisting of miniature weather stations capable of monitoring various environmental conditions (e.g., temperature and humidity, wind, soil moisture) to help predict and detect wildfires in a timely manner and mitigate their potentially devastating consequences.

Pressure injuries are localized damage to the skin and/or underlying tissue that usually occur
over a bony prominence. Pressure injuries most commonly develop in individuals who have
low-mobility, such as those who are bedridden or confined to a wheelchair and consequently are
attributed to some combination of pressure, friction, shear force, temperature, humidity, and
restriction of blood flow and are more prevalent in patients with
chronic health problems.

The proliferation of data generated at the network edge and the increasing networking and computational capabilities of edge devices has given rise to applications that harness data to provide services and has given prominence to developing better networking, storage, and computation infrastructures at the edge. These enabling technologies, artificial intelligence and edge computing, has manifested in a new field — edge intelligence. In this research, we aim to provide support to the growth of edge intelligence by proposing frameworks for fully decentralized learning to enable full-spectrum edge intelligence, developing simulation platforms to allow for network-cognizant distributed learning experiments, and more.

Recent years have seen a rapid growth in the number of cloud computing applications, connected IoT devices. With the large scale deployments of 5G in the near future, there will be even more applications, including more bulk transfers of videos and photos, augmented reality applications and virtual reality applications which take advantage of 5G’s low latency service. All these add to heavy, bulk of data being sent to the data centers and over the backbone network. These traffic have varying quality of service requirements, like low latency, high throughput and high definition video streaming.

This research project focuses on designing a load balancer for data center networks that is adaptive to the kind of traffic it encounters by learning from the network conditions, and providing low latency and high throughput performance with increased network utilization.

Vehicles following each other in close proximity, in the form of a platoon to reduce fuel consumption due to reduction in air drag is not a new concept. Introduction of vehicle-to-vehicle communication has led to further decrease in inter vehicular spacing, enabling further reduction in fuel consumption and improving the road capacity. Formation and dissolution of the platoon is generally governed by the lead vehicle, leading to a centralized approach. This suffers from various drawbacks such as serialization of maneuvers, shorter platoon length and packet loss. A decentralized approach mitigates these issues and is traditionally realized using the top-down approach by first identifying the maneuvers and then implementing the messages required. Such a system is termed as a “Deliberate System“. We have developed ADEPT  – Autonomous Decentralized Emergent-behavior based Platooning, to mitigate the problems of centralized system using a novel decentralized approach to automated vehicle platooning inspired by “Emergent-Behavior” commonly found in biological systems. In ADEPT, each vehicle follow simple rules when they need to interact in order to carry out maneuvers. Platooning maneuvers such as join, exit, and lane change “emerge” as a result of vehicles following these “emergent rules”. Preliminary complexity analysis as well as simulation experiments yield promising results that demonstrate emergent-behavior based platooning as a promising form of decentralized platooning. BTS is a grad student project developed by i-NRG and other students to provide real-time tracking of the campus shuttles.

This INRIA – UC Santa Cruz Team investigates a number of research challenges raised by message delivery in environments consisting of heterogeneous networks that may be subject to episodic connectivity.

Enabling ITS through programmable networks In this project we study mobile wireless networks by looking at mobility management and analysis of human mobility, focusing on the main goal of understanding human mobility and applying our findings on developing new realistic mobility models for simulations.

One of the project’s main goal is to develop novel, socially-inspired human mobility models that also account for geographic diversity of the region of interest. The proposed models consider features observed in real human networks such as differential popularity, transitivity and clustering as well as geographical features and preferences from users. Another important deliverable of our work is a suite of tools that implement the proposed models and that can be used by other researchers and practitioners in the evaluation of mobile systems and protocols. Here is a list of how-to solutions for problems that we have encountered while doing research in the i-NRG Lab. … END_OF_DOCUMENT_TOKEN_TO_BE_REPLACED